Tear up your Textbooks! (critically) 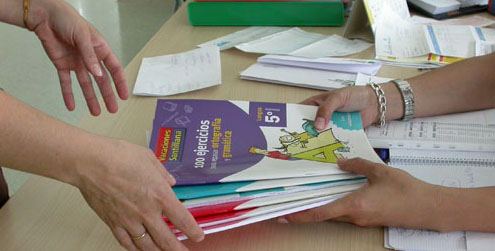 Before getting down to business, I feel I should apologise for the scope of this post. Below, I will deal wth the problems and challenges of a textbook-based education. I am doing this through the lens of a European student that can afford to reject the use of textbooks in class, as I have access to amazing alternatives in libraries, journals and the Internet. However, I am afraid that my situation does not apply to communities that can hardly afford a single textbook per child (e.g., as SACMEQ points out, only 17.8% of children in Kenya own a reading textbook). Thus, I owe all these communities an apology, as most of the troubles I mention in this post are still beyond the reach of their education systems. As I cannot help bearing them in mind, I sincerely hope they improve their educational environments and fully develop all their potential.

For students’ families (and states), September is tantamount to expenses. School uniforms, clothing and supplies are among the main costs, but none seems to generate as much controversy as textbooks. Whether due to price, content or weight, textbooks are always at the forefront of the educational debate. Issues around textbooks have many aspects and respond to different contingencies. In this article, I will try to explain: a) the nature of the main problems regarding textbook-based education and b) the projects that are currently trying to overcome these problems.

Textbooks, as we know them today, were first published in the late 18th century and the early 19th century. They were intended to be the information channel of a new educational system that was emerging during the Industrial Revolution. This new system began to evolve towards an education “paid by taxation, compulsory to everyone and free at the point of delivery” and was mainly designed to lead to literacy. Thus, textbooks “were probably a mixture of grammatical rules and popular maxims designed to lead to literacy” (Wakefield 1998, p. 5) written in a catechetical style. Moreover, textbooks were thought to contain all the knowledge available and disclosed it gradually by chapters in order to make it easier to learn. This idea was fully consistent with Positivism and Universalism, both trends that enjoyed wide circulation at the time (Calhoun 2002).

However, it was not just knowledge that was to be collected, but truth. This is crystal-clear in the very first political speech that included any mention to a textbook, given on 10 September 1791 before the Assemblée Constituante by Talleyrand, who called for a model that “turns every truth in something universally familiar […]” (Choppin 2001, p. 209). The philosophy behind this textbook model entails two main tasks when writing a textbook: selection and (over)simplification. The biased outcome of these tasks is supposed to be “the truth”, leaving little room to divergent thought.

This may have made sense in the 18th century, when knowledge was far less accessible (and affordable) and teachers were less trained (Wakefield 1998, p. 12). Thus, the recompilation of simplified knowledge was a great learning-through-reading solution. This may sound similar to the encyclopaedic movement, even though unlike encyclopaedias, textbooks present a linear “low-to-high” narrative because they intend to offer a comprehensive selection of knowledge in a given subject.

In this new concept of education, public authorities saw textbooks as a new channel for conveying values and paradigms (Choppin 2008). The information given in different subjects started to be biased obeying the political interests of the nation-states of the time. The content and syllabus of History, Geography and the Humanities was (and is) the most biased, and there are plenty examples of this in recent history:

a) Explain how Arab rejection of the state of Israel has led to ongoing conflict.
b) Evaluate efforts by global organisations to undermine US sovereignty.

The examples above illustrate how information may be biased with the intention of finding a cohesive discourse of truth within nation-states in order to be used to teach future citizens in a given context. But biased information is not the only consequence of how textbooks have been used. Moreover, the way that textbooks present knowledge seems to impede the training of critical and divergent thinkers.

Textbooks display knowledge as something static: you can hardly find any bibliographic references and it is impossible to find intra-text citations. Knowledge in textbooks (chiefly in primary and secondary education textbooks) “is presented as a commodity to be acquired, never as a human struggle to understand, to overcome falsity, to stumble toward the truth” (Postman 1996).

“Wider critical thinking and learning is being sacrificed by books which encourage ‘parrot-learning’ to get pupils through exams”, writes Polly Curtis in an article in The Guardian. When Curtis talks about “parrot-learning”, she is highlighting that textbooks offer an oversimplified narrative of the facts, with no alternative explanations and no references to original sources of information. For instance, in the following sample of a Food & Nutrition textbook for GCSE in UK, you will find no references to original sources, with the exception of a couple of links to relevant websites. The narrative is hierarchically linear, in the sense that today’s paradigmatic diet is at the top and alternative diets, such as vegetarianism, are placed below it. Moreover, instead of quoting projects that do research on alternative diets, they write statements like “some people think that a vegetarian diet is healthier than one containing meat and meat products”.

The result of this kind of textbook-based education seems dramatic in familiar contexts where reading is not part of their regular activities. In these contexts, what students learn from textbooks is likely to be the only knowledge they acquire about the world (history, geography, how government works, maths, etc.). If we bear in mind that in 2012, 26% of the adult population in OECD countries  left their education at any stage before finishing their higher secondary education, we can say that a significant proportion of the population has crystallised the information learned during their school years as true.

Moreover, few examples of horrendous mistakes in textbooks like those in Mexico or Brazil denotes that a reassessment of the role of textbooks in class is needed. In countries where reading is part of the daily tradition, such as Finland, “textbooks are virtually redundant”, as Alex Duval says. Maybe they are useful for following certain structures in class, but teachers have much more freedom in order to select their curricula and, more importantly, they take a “workshop approach” to their classes. In Finland, their education is based on two main principles: a) the time spent in individual learning is increased (known as the “problem-based” approach) and b) students are forced to seek out information beyond the textbook, thus making critical and versatile thinking a key aspect of the learning process[2].

After discussing the shortcomings of textbook-based education, it is important to highlight the different kinds of alternatives that have mushroomed in various sectors of the educational scene, and Dogme language teaching (or just Dogme) should top the list. Named after Lars von Trier’s Dogme 95, Dogme is a communicative approach to language that argues that “the over-use of published materials is stifling the very communicative approach they are designed to drive”. Even though this was designed exclusively for language teaching, this concept could apply to any subject because it fosters the use of published materials in a critical way that recognises their cultural and ideological biases. Besides, it implies the joint construction of the knowledge used in class through dialogue among teachers and students.

On the other hand, Dogme is extremely purist and that may put more constraints on teachers. Besides, its rejection of any kind of published material is not useful at all in subjects apart from language teaching. It is vital to cast doubt on published material (and limit the use of textbooks), but if they were barred from the classroom, the sole authority left would be the teacher’s, and this would create another limit on learning how to think critically.

The Wikipedia editing model has been extremely inspirational for those that look for ways to jointly construct knowledge in class and force their students to prove the reliability of their sources. Different projects, like the one carried out by Churchfields School, shows the potential both of using Wikipedia for learning (since most of the articles have a great set of references and quotations and its reliability is equal to or better than the reliability of Encyclopaedia Britannica) and using wikitools for jointly constructing knowledge used in class.

The strength of being inspired by Dogme or Wikipedia is in no way trivial. The import of the Wikipedia model boils down to the fact that it forces students to look for reliable information in order to create a reliable tool. And the only way to create reliable tools is by viewing the sources used with a critical eye. This could have great consequences. It could increase open-mindedness, make learning more enjoyable and boost reading skills overall. In that sense, textbooks may be responsible for the current state of functional illiteracy among a relevant proportion of the OECD population, a topic we will address in the future.

[2] Information retrieved on 29/09/2013 from the University of Eastern Finland: “Tablet computers replace traditional textbooks in a Finnish school” (richarddawkins.com).

23 October 2013 by José Luis Mateos in Education, Humanities, Miscellany Comments are off
Tagged with: critical thinking, Dogme, learning, teaching, textbook-based education, textbook-free classes, Wikipedia
© SIRIS Academic SL - 2015. All Rights Reserved.
This website uses cookies to improve your experience. We'll assume you're ok with this, but you can opt-out if you wish.Accept
Privacy & Cookies Policy