Massification, globalisation and new technologies: higher education in the face of change 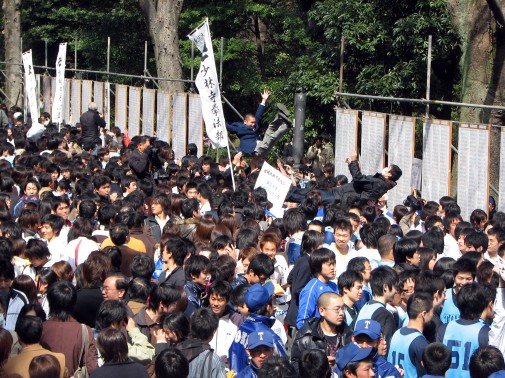 The world is changing; in this respect there is nothing new. Societies are facing at least three great revolutions: the human population is exploding (projected at 8.9 billion in 2050, which means an increase of 47% from 2000) (United Nations 2004), globalisation continues ploughing its furrow and new technologies are transforming everyday life in relation to our environment (and especially in the fields of communication and digital technologies).

All three of these changes directly affect higher education, and one may be excused for asking whether these institutions, which have changed little since the first universities were created in the 11th and 12th centuries AD, are prepared to adapt. Since mediaeval times, the task of higher education was to train specialised people in order to improve society as a whole by spreading certain knowledge. These days, society itself is becoming a knowledge society (Unesco 2005), meaning that knowledge is no longer the preserve of an elite but an instrument for fulfilling everyday duties. The demand for higher education is increasing, in both the job market and for reasons of personal development. As such, its role should be visibly larger. But in its current state, can higher education rise to face these challenges?

According to projections , the number of students in higher education worldwide will reach 262 million by 2025, which is more than the double the number in 2012 (Davis & Mackintosh 2012). Of course, the situation will not be the same everywhere. For instance, according to Eurostat, populations will fall in Europe by 2050 due to a declining birth rate. Thus, even if the populations of affected states stabilise through immigration, higher education will be hit because of the decline in young people. On the other hand, populations are expected to explode in Asia and in developing countries more generally. In other words, the map of higher education is on the verge of undergoing profound transformation. A question arises: is higher education currently prepared for such massification? Given that most of the new students will come from developing countries, experts expect an increase in transnational students. Even as we witness tremendous development in Asia, recently illustrated by the National University of Singapore, the game is now global: as student populations grow, international student mobility rises along with them. Some argue that partnerships and alliances between national institutions are the answer, but this underestimates the legal imperatives of national boundaries. We are living in a globalised world, but under territorialised rules. Even if agreements exist that grant recognition to a national degree from other countries, in the next few years we will see the volume of transnational students spilling over existing national frameworks. For instance, attempts are being made to build a European area of higher education by creating a uniform portfolio of degrees, but without granting European status to higher education institutions so they may straddle the borders in response to students’ needs. Could recognising national degrees in an exchange programme, for example, respond sufficiently to this transformation? Perhaps the very structure of higher education must be transformed and opened beyond its current environment, no longer limiting it to a single nation. Perhaps experiments such the University of Central Asia could be considered here, registered by the United Nations and created through a treaty signed by Kazakhstan, Kyrgyzstan and Tajikistan.

Moreover, massification strengthens the effects of a second transformation: namely, globalisation. In an increasingly open world, higher education is becoming a major economic market with big stakes involved. The hundreds of millions of students are also a significant sector that institutions will try to control in order to ensure their sustainability, considering the general drop in public funding. The spirit of competition that is now so characteristic of business schools, with their famous MBAs, will soon enter all domains. Higher education institutions are setting out to transform themselves into brands aimed at achieving market penetration. But today, this takes only one form: by aligning market demands, adapting training and current employment needs. With its focus on merchandising, higher education is at risk of losing sight of one of its core missions of reflecting on and creating future possibilities. The clearest illustration of this is seen in the human and social sciences, which are under genuine threat in some countries. Universities and vocational schools are rapidly moving away from each other. To address this challenge is not to obey market demands, but to seize on the need for real thinking about the place of higher education, the organisation of the different domains and other subjects. In a way, this challenge is hardly new; Durkheim pointed out that science has a complex and central place in our educational model.

Finally, no one speaking about higher education can avoid the delicate matter of digital and online technologies. Ask anyone, and they will swear that we are on the cusp of experiencing a true digital revolution. The latest sign of this revolution consists of Massive Online Open Courses (MOOCs). There is no doubt that computers have changed our relation to knowledge, closed distances and made it possible to store and access an incredible amount of data. But now we have nearly as many issues as we did before. We know how to digitalise. But what’s next? Knowledge is merely resting dormant in digital hard drives, as it once did in libraries. Access to knowledge is not secured, as various controversies affecting the scientific publishing system indicate[1]. The digital revolution in online learning offers us a chance to really think about knowledge and education. For the moment, its technical difficulties (regarding certification, for instance) are slowing it down. But this domain is crucial to all aspects of our future societies and except for some precursors in the US, higher education institutions have yet to grapple with the issue.

The world is changing, so we must rethink and define our frameworks. Any strategy for higher education needs to bear these three changes in mind if it is to be applicable to the real world. And it must answer the question: what will higher education prepare students for?