The European Research Council (ERC) marks a new approach to investing in frontier research in Europe. Funded through the European Community’s seventh framework programme (FP7) as the implementation of the ‘Ideas’ specific programme, the ERC aims to reinforce excellence, dynamism and creativity in European research by funding investigator-driven projects of the highest quality at the frontiers of knowledge [1].

The “Ideas” specific programme’s budget implemented by the ERC is EUR 7.5 billion over a period of seven years. It represents around 15% of the entire FP7 budget. The novelty of this boiled down to the fact that before the ERC was launched, researchers needed to seek funding in home institutions and programmes, or in European calls which were very much oriented to applied sciences. With the launching of the ERC, political goals were left apart and every proposal was evaluated without any geographical or political bias, paraphrasing Fotis Kafatos, former ERC president [2].

However, geography plays a major role in research performance of scientific institutions (Bommann et al. 2014). Variables such as the Gross Domestic Product (GDP) per capita of a country or a region, the number of residents and the corruption perception index have a deep effect on the performance of institutions. For instance, Meo et al. (2013) have recently published their research where the issue is discussed. They reach the conclusion that those Asian countries that invest a greater share of their GDP in R&D activities their institutions are more productive in the shape of indexed publications.

This is not different within Europe. As a matter of fact, the GDP effect on science production may be identified using ERC data on successful grant application for the applicant countries -EU 27 and Albania, Bosnia and Herzegovina, Switzerland, Croatia, Israel, Iceland,Faroe Islands, Liechtenstein, Montenegro, FR of Macedonia, Norway, Serbia, and Turkey. Nevertheless, the geographical scale to assess this issue used by ERC itself and other researchers (see Barbulescu 2011) is the country. It is noteworthy, though, that this effect can be assessed from a regional view.

In SIRIS Lab we have conducted, during the last term, research on successful grant application for the ERC grant scheme “Advanced Grant” – which targets senior researchers – on Social Sciences and Humanities. ERC grant scheme covers two other main areas -life sciences, and physical sciences and engineering- beign the Social Sciences and Humanities the most competitive, with an average success rate below 20 per cent. This is explained by the fact that fewer grants are available for this area (Barbulescu 2011).

The competitiveness of ERC Advanced Grants on Social Sciences and Humanities makes them a suitable study case for assessing the effect of GDP on science production of European regions. European regions in terms of GDP per capita are “not equal and do not stay constant” (Quah 1996). The European Union has hitherto promoted a regional policy that seeks convergence among its regions[3]. This has been also conducted for research, by the establishment of an European Research Area (ERA) that seeks unification among its regions. However, a multi-speed ERA is very real (Greenhalgh 2014) and then this has an effect on the location of success ERC Advanced Grant applications.

In fact there is a great confluence between Regional Competitiveness and Employment regions and those regions that host ERC Advanced Grant granted institutions in Social Sciences and Humanities. In figure 1 it is shown the status of European regions used by the European Regional Development Fund in order to allocate resources. This map allows the reader to distinguish between those regions from more competitive (dark blue) to those in a phase of convergence (dark red). 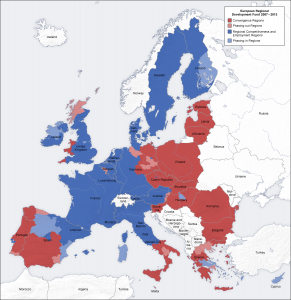 In figure 2 it is shown the institutions that have hosted 1 or more ERC Advanced Grant grantee in Social Sciences and Humanities between the period of 2008 and 2012[4]. The former map answers, with a couple of exceptions, to the regional pattern shown in the first figure, reinforcing the idea that GDP per capita of a region has an effect on science productivity. 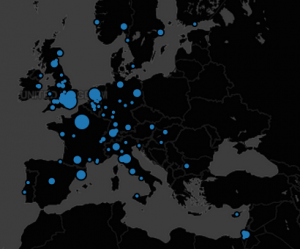 The phenomenon studied above through the allocation of ERC Advanced Grants in Social Sciences and Humanities is another example of the strong divergence in research productivity among European regions. This discussion is immersed in the debate on research policy formulation in an European level, taking into account that due to the economic idiosyncrasy of the regions of Europe and the cuts on funding that several national scientific systems have suffered, policy formulation on the matter is striving to keep the path to convergence. More and more different voices are claiming to create different funding instruments to develop specific sectors in less successful regions (Greenhalgh 2014) other than groundbreaking basic research, which requires great amounts of resources. However, there is also time for regional governments and institutions to decide whether they want to participate in groundbreaking research by identifying strengths in their systems in order to protect them and seeking ways to replicate their successes.

[4] The complete visualization of figure 2 can be seen at:  http://public.tableausoftware.com/profile/james.bond#!/vizhome/erc_ map/Dashboard.