These days we are witnessing attempts to build a single, pan-European sphere of higher education and research (HE&R) in the fight against national area segmentation. The Bologna Process and its reform of academic degrees is well known, but is it really clearly understood? As the original Bologna Process formally ended in 2010, the time has come to examine the first results. Since it will gradually come to shape all activities in the field, how HE&R stakeholders understand it will be crucial for carrying out any project.

1. What is the European Higher Education Area?

The EGEA is the heir to the famous Bologna Process, which ended an initial series of discussions in 1999. The aim was two-fold: to promote student, teacher and researcher mobility and to improve the quality of higher education and research through European cooperation. It began a ten-year period of reform to achieve these objectives, broken into three lines of action:

In 2010, the Bologna Process stakeholders decided that these aims had been achieved and that an interlinked European HE&R sphere had been created as a result, which they called the EHEA. The mission of the EHEA was to establish the accomplishments of the Bologna Process and it directly inherited its structure. Therefore, the EHEA is a place both to discuss HE&R politics and to apply them. But was is its reality? What is its legitimacy? What are the stakeholders involved?

In this process, states are making decisions at a supranational, European level, while implementing reforms in their own territories. But standing in the way is the EHEA-Bologna Process structure, which is not a supranational power and represents no loss of national sovereignty, but is merely—for the time being, at least—a cooperative mechanism. 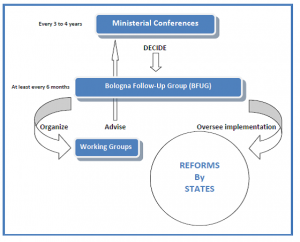 Organisation of the EHEA

The figure above clearly demonstrates that the EHEA involves two main stakeholders: states and the Bologna Follow-Up Group (BFUG).

First are the states, which we’ll examine more closely. This defines the formal structure of the EHEA, but does not tell us anything about its actual boundaries. If we explore further, we notice that 47 countries are part of the EHEA[1]: membership depends not on European Union membership, but on ratification of the European Cultural Convention [2], which aims to preserve and spread common European culture. In order to protect European culture and promote its expression, this convention is open to neighbours. Thus, by including non-European Union members such as Iceland, Kazakhstan, Georgia, Ukraine, Turkey and Russia, the EHEA is not a strictly European sphere, but also extends to Central Asia, for instance. Given that the primary aim of the Bologna Process was to assist the construction of the European Union, this decision may seem questionable. Of course it is healthy to integrate every affected neighbour willing to raise their level, but leaving the door open also calls the original objective into question: defining a common European culture is not the same as helping it to spread. Moreover, it implies that intra-EU debates are already settled, but significant levels of dissent within the EU tend to belie this last point. As a result, the EHEA’s vision of Europe remains unclear.

Second is the Bologna Follow-Up Group, the expert body that allows formal projects to become reality and therefore plays a central role. Its composition evinces a laudable effort to create a representative forum for discussion, including all involved stakeholders. 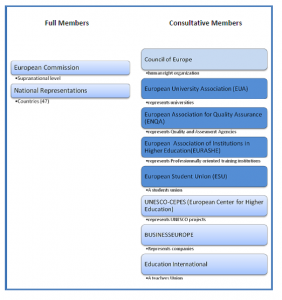 Nevertheless, this schematic presentation is ultimately insufficient from a critical standpoint because the representative suitability of each stakeholder is not questioned, whereas most of them are in fact groups of national stakeholders. For instance, a bit of historical inquiry reveals that this multi-partner forum was created after the Bologna Process began. The students’ voice was first heard only in 2001, so it was not taken into account during the first definition of principles and was only consulted regarding implementation. This shows that further development is required in order to verify the assertion that the BFUG is representative enough and that all voices are being heard in the process to create an EHEA.

2. How can we currently assess the Bologna Process?

To ask about the current situation of the EHEA is to try to define the successes and failures of the Bologna Process. If so, what has been done concerning its three main aims? Though this question obviously calls for lengthy discussion, we can sketch the following outline.

The first aim concerns mobility programmes. From its beginning in 1987 to 2007, over 1.5 million students have participated in the most widely renowned EU mobility programme, ERASMUS, including 250,000 students in the 2011-2012 academic year. In 2010-2011, 40,000 teachers, researchers and administrative employees received aid from the EU to go abroad. Today, 33 countries participate in the programme (EU member states, Croatia, Iceland, Liechtenstein, Norway, Switzerland and Turkey). According to statistics, ERASMUS students find jobs more easily than non-ERASMUS students. Thus, the programme has proven to be an initial success, even if some problems still need to be fixed. For instance, the programme aims to get 20% of the student population to participate in 2020, with more balanced flows between countries and an increase in the number of grants (some criticise the fact that ERASMUS is not socially indiscriminate and shows preference for wealthier students over poor ones).

The results of the second and third aims of the Bologna Process are not so rosy. The harmonisation of academic degrees and Bachelor’s, Master’s and PhD reform is now a reality in most European countries. Still, some member states are putting up resistance, such as Spain with its grado (four years, Bachelor +1). While the ECTS system is now well spread, its actual forms are not as fully functional as official sources describe them. Finally, the creation of a common standard for quality review and assessment is still a touchy question. The European Standards and Guidelines for Quality Assurance[3] have been defined and the European Association for Quality Assurance in Higher Education (ENQA) has been created, though neither have been implemented through the entire EHEA. For instance, the 2012 Bucharest Ministerial Conference lists the need to improve data collection and transparency by defining common criteria and the definition of common criteria for qualification as among the five lines of action for 2012-2015. In other terms, a common standard must be defined; it is not enough to make each national system transparent. In addition, one can see that, at the BFUG level, the problem is not solved but only shifted to another level: from criteria for reviewing HE&R to criteria for reviewing the suitability of quality agencies and processes. Moreover, those standards are far from settled in every national context. Recent anti-AERES[4] protests in France, calling for its abolition, are a good illustration of this: the model cannot be considered effective.

Consequently, one may be forgiven for asking if the first step of the Bologna Process is really over and if national HE&R systems are sufficiently intertwined. One may also have doubts about the clarity of the overall project, building a European area without limits, as well as of the absolute value of its founding principles. Furthermore, an initial assessment of the first ten years of the Bologna Process shows a major risk of rift between the European level (ministerial conferences and the BFUG) and national contexts and realities. This all shows that there is still at least a long way to go, even before entering into the details of the overall principles at work.